Kapi‘olani Community College students are expressing concern and confusion following the news that the KCC Faculty Senate has initiated a vote of no-confidence for chancellor Leon Richards. 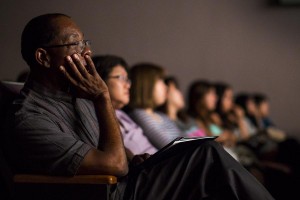 The online vote, which is scheduled to end on April 20, was approved, 9-3, by the senate’s executive committee on April 4.

In a letter to faculty, the committee explained that the vote was prompted by a recent survey by the University of Hawai‘I Professional Association, the union for UH system educators, which found high faculty dissatisfaction with Richards.

According to the letter, 127 out of 277 KCC faculty members responded to the poll, the highest response rate of all UH system campuses. Of those respondents, 78 percent did not support the renewal of Richards’ contract.

Among the complaints leveled against Richards were accusations that he does not leave academic decisions to faculty, support faculty to be effective instructors, make timely decisions and communicate important and relevant information in a timely manner.

On April 9, the Honolulu Star-Advertiser ran a story about the no-confidence vote. For many students on campus, this was the first indication that there was trouble in the administrative ranks.

“I’m just worried,” said 19-year-old Joy Makasobe, a sophomore studying ITS. “I hope that it doesn’t affect student tuition or how classes are. I don’t know much about the issue or how (Richards) has affected us as a leader. I like things the way they are. I hope there’s not drastic affect on us.”

The Faculty Senate invited Richards to attend an open forum on May 11. Richards, however, opted to host his own open forum on campus on April 13 to respond directly to questions and concerns from the KCC community.

At one point during the meeting, Richards responded to a complaint that he does not communicate in a timely manner by explaining that his process for dealing with important situations was to gather as much information as possible before replying.

The Faculty Senate Executive Committee did not attend the forum, explaining that it “must uphold and honor the Senators’ voices and the action that they recent passed.”

Students continue to have mixed reactions as the controversy unfolds.

“It seems like the community college has a lack of leaders, so I think it is time for change,” he said.

Other students expressed support for Richards.

“I support Leon for having always done the little things to support us,” said Mary Archer, 23, a senior majoring in English. “It is time we give back.”

“It is not without merit,” said Student Congress chair William Arenivas. “All organizations are trying to conduct this in a most transparent way and results from this challenge will impact KCC for years to come. It is not driven with spire and this is a heavy subject. We’re trying to consider all aspects.”

Ish Salameh, the Student Congress secretary, declined to take a stand on the issue but said that he did “commend the fact that there’s a discussion about this problem.

In a letter to Kapi‘o, Fujikawa noted that the Faculty Senate action represented “democracy” but noted her support for Richards and the international focus he has brought to KCC.

“It is Dr. Richards who cares deeply about individual students and knows students by name,” she wrote. “He is not only highly respected in the United States, but in China, India, Zimbabwe, Sri Lanka, Pakistan, Japan, Korea, Micronesia, Morocco — worldwide — creating community colleges to develop the middle class, thus world peace.

“His light is the first to go on and the last to do off at KCC,” she wrote.

Richards has been with KCC since 1977 and has served as chancellor since 2007.