On April 20, Earth Day 2016, Kapi‘o reporters fanned out across campus to find out about on-campus sustainability projects and the visionary students, faculty and staff behind them. 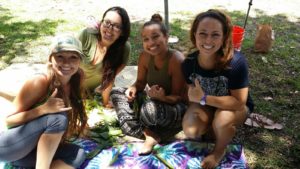 One day each year, Kapi‘olani Community College joins individuals and organizations worldwide in reflecting our relationship to the environment and celebrating the myriad ways in which people can enact powerful change for the benefit of the Earth.
This year, KCC’s Earth Day featured a walk through campus featuring all of the inconspicuous jewels that administrators call “sustainability assets.”
The event was planned, publicized and executed as the primary annual project of the Sustainability Promotion Team, a service-learning project developed three years ago.
SPT was created to encourage the KCC community to regard the campus as a part of the overall community. While service learning in general benefits several worthy partners all over the island, a growing number of students, faculty and staff ought to direct their energies toward identifying opportunities for sustainable applications on campus.
The team — spearheaded by English professor Krista Hiser, who serves as faculty adviser, and Skye Rhoden, an aspiring nursing student with a long resume of participation in sustainable activities and projects — was initially modeled after the Health Promotion Team, a student service learning organization housed under the same Service and Sustainability Learning office. However, SPT occupies its own unique space.
“SPT is less of its own pathway,” Hiser said, “rather, it h as been more an inclusive upgrade to our existing educational pathways wherever we find opportunities to do so.”
During the Spring 2016 semester, more than 400 students completed at least 20 hours of service learning, a reflection of the growth in sustainability-related opportunities over the last few years. While boosting campus service learning participation on the whole is an overall goal for SSL, the pedagogical motive comes down to teaching students important skill sets that might not be developed in their normal coursework.
The goal of all this activity, besides helping the earth, is to develop the next generation of leaders in the fields that will provide the jobs of the future.
“Especially among our leaders, we design the service learning model to provide natural opportunities for all different kinds of growth,” Hiser said. “Students quickly learn to hone their communication skills, conduct surveys on a large scale and work closely with faculty.”
Recently, SPT has focused on recruiting and developing so-called “change agents,” sustainability-driven students equipped with the planning and organizational tools to effect change in the world.
KCC freshman Kayla Hatcher got involved in KCC’s Earth Day activities through service learning opportunities offered through her biology class. She hoped her efforts would result in greater awareness of critical environmental issues.
“People will be more aware and educated on keeping the environment clean and stable,” Hatcher said.
— Billy Sage V, with James Ragasa

A Total Closed Loop Cycle
Systems of food production, consumption and waste are a major problem for the world’s population, ecology and economies. At the KCC’s culinary program, two individuals have made strides in addressing the problem through the adoption of a closed-loop system.
In essence, the closed loop is all about symbiosis — harmonic relationships between two or more living entities that serve the needs of one another.
Under the supervision of Ronald Takahashi, chair of the culinary department, such a relationship is realized within “earth tubs” set up in various areas around the department. The 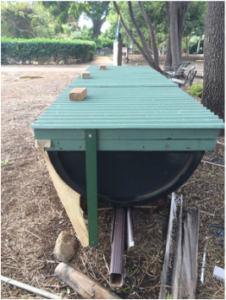 The compost is used in the department garden to supercharge both aquaponic and tradition, in-ground plantings. The earthworms, too, are recycled in a fashion a food for aquaponic tilapia. It’s a 100 percent closed loop system that requires virtually zero outside energy input.
Pastry instructor David Brown oversees the aquaponic system, devoting several hours each day to maintaining the earth tubs, compost bins, and bio-diesel generator as well as multiple gardens around campus.
Brown emphasized that his efforts are year round.
“I want to leave a good planet for my grandchildren,” he said, “not an invitation to Earth Day.”
The culinary program produces 25 tons of compost every year, according to Brown.
The process helps to reduce or eliminate organic waste otherwise bound for a landfill and students learn not only to prepare food well but also how to reduce waste by separating pre-consumer food waste before it goes into general waste.
— Billy Sage V and Billy Liu 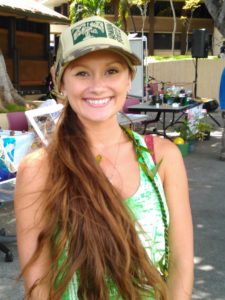 For Sustainability Promotion Team member Skye Rhoden, direct engagement and dialogue have proven effective methods of affecting meaningful change.
While taking a class with SPT faculty adviser Krista Hiser, Rhoden volunteered to work with the Beach Environmental Awareness Campaign Hawai’i to educate people about a new ordinance banning smoking at public beaches and parks.
Rhoden found that she was most effective when enlisting the support of old-timers at the beaches she visited.
“I communicated with the ‘uncles’ on the beach: ‘You guys are the example for tourists; you guys are the people our generation looks up to,’” she said. “Because I’m local, they listened to me and they wouldn’t have necessarily listened to the organization head leaders because they were not from here.” Rhoden said the experience helped her to overcome her natural shyness, which in turn has helped her grow into an important and influential student leader.
She was particularly active in trying to coordinate and promote KCC’s Earth Day events through flyers, social media and other avenues.
“The event is for the public,” she said. “It’s to create an awareness for them and … the students and faculty as well.”
Rhoden said she was pleasantly surprised at the turnout. She hopes for even greater participation next year.
“For me, I would like to have a bigger team, like for more students to be part of the promotion team through the service center,” she said.
— Jack Palmer

Mala Ma‘unu‘unu
In expressing the essence of Native Hawaiian philosophy on righteous stewardship of the land, newly appointed Dean of Arts and Sciences Nawa‘a Napoleon turned, appropriately, to a Hawaiian proverb:
He ali‘i ka ‘aina, he kaua ke kanaka.
(The land is a chief, man is its servant.)
Napoleon’s interpretation of this idea is that the land has no need for human, but humans need the land to survive and must serve it faithfully to ensure humanity’s continued survival.
“We are still only looking at our survival as humans and have not yet moved our thinking toward seeing land as our chief,” he said.
Napoleon also invoked the concept of malama ‘aina, which is commonly translated as caring for the land.
“Is it we who are taking care of the land?” he asked. “Or is it the land taking care of us?”
Napoleon’s beliefs are elaborated upon every day at Mala Ma‘unu‘unu, located near the Manele building, a garden patch he helped to develop years ago.
These days, the plot is maintained by the volunteers at Kapo‘oloku, the Native Hawaiian Success Initiative.
Jordan Anderson tends to the garden three days a week in an effort to maintain a safe haven for indigenous Hawaiian plants on campus.
Anderson, who earned an AA in sustainability from KCC, invited fellow students to volunteer at the garden and experience for themselves the challenges and satisfaction of caring for uniquely Hawaiian flora.
— Billy Sage V and Skye Kaupiko 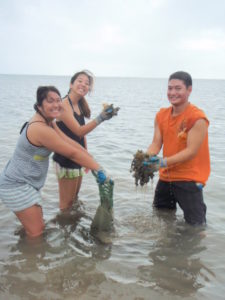 For the last several years, KCC students have been instrumental in helping to restoring algae-beset Maunalua Bay in east O‘ahu.
Each semester, biology professor Wendy Kuntz brings a group of service-learning students to the bay to help clear invasive algae that threatens natural coral reefs and native aquatic species.
The cleanups are a key part of overall conservation efforts administered by the Malama Maunalua Bay program, which was established more than a decade ago by concerned area residents.
Habitat restoration coordinator Nicole Williams said student groups are typically assigned to a single 10-square-foot area. A typical day’s yield is enough to fill multiple truckloads.
Despite drastic improvement over years of restoration efforts, Williams says constant upkeep is necessary.
“In 2016, we’re starting to see a lot of new regrowth again, so now we are just trying to stop it from getting back to what it was,” she said.
For more information on Malama Maunalua Bay volunteer opportunities, visit: www.malamamaunalua.org/volunteer/
— Marcus Watabu

In 2007, a small group of students who shared a common desire to promote sustainability of campus founded the Ecology Club, a registered independent organization.

Nearly a decade later, the club boasts more than 230 student members and organizes or supports several major initiatives at KCC and within the greater community.

Among recent activities, the club helped to spread awareness of Rapid Ohia Death and participated in the Manu O Ku Festival at “Iolani Palace.

As part of KCC’s Earth Day calendar of events, representatives from the club presented a weeklong series of Earth Day Open Classrooms and shared lessons from the innovative learning community “Decade Zero,” which is focused on issues of climate change.

The club is advised by Wendy Kunz, who also serves as chair of the Faculty Senate Subcommittee on Sustainability. Over the years, Kunz has personally mentored and provided one-on-one support to hundreds of students who come from groups who are underrepresented in STEM fields, including women and Native Hawaiian students.

Ecology Club members are typically more engaged in STEM programs and use their specialized knowledge and skills in service to the community.

“I wanted to join this club for many different reasons,” said sophomore Charles Dote. “The main reason was because I wanted to learn a out the environment here in Hawai‘i. It is one of the most unique environments in the world; it’s the most isolated landmass there is. I also wanted to develop a respect for the environment. I wanted to know why it was important to protect species.

“I also wanted to help out, lend a helping hand,” Dote said. “The Ecology Club is a great way for your to volunteer with different groups around the island. “

Alex Awo is a third-year student enrolled at KCC and UHM. Like Dote, he’s devoted to doing whatever he can to support the environment.

“Taking care of our planet is a really important thing, not only in the science field but in cultural fields and ecological fields and we want our students to know that there are other students who are out working in the environment who care about our planet and who are trying to make the world a better place.”

A Garden of the Senses

At nearby Leahi Hospital, one of the most powerful therapeutic spaces is powered solely by nature.

The Sensory Garden was created with the help of KCC art professor Carl Jennings to provide patients, particularly those of advanced age, with a multi-sensory experience akin to being out in nature.

Each semester, KCC student volunteers devote time to maintaining the garden, weeding, planting, interacting with patients and learning first-hand about the powerful effect plants can have of people who may be ailing physically or experiencing depression or fear. 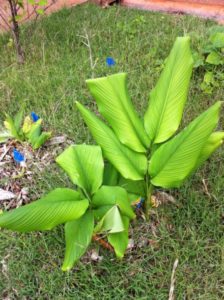 KCC third-year student Alex Lum has served as director of the garden for the last two years.

“People are easily induced to spend large amounts of money for commercial products because they are imported from somewhere outside the island,” Lum said. “If you make your own, it is better for your skin and you are cooperating with ecology.”