The fifth-annual Kapalua Half-Marathon boasted a field of more than 6,000 participants, ranging from elite runners like Olympian Isabella Ochichi to recreational athletes from Kapi’olani Community College. 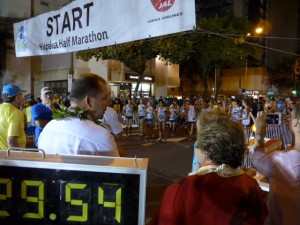 The race, which is affiliated with the Honolulu Marathon, takes its name from the Hawaiian word for “half.” The 13.1-mile course started at the Duke Kahanamoku statue on Kalakaua Avenue and continued along Ala Moana Boulevard, Nimitz Highway, S. King Street, Punchbowl Street and back onto Ala Moana Boulevard to Kalakaua Avenue, Monnsarrat Avenue, and Diamond Head Road to the finish line at Kapi’olani Park.
Runners were tracked with a MYLAPS microchip embedded in their number bib that also allowed family and friends to keeps tabs on their progress via a mobile app. 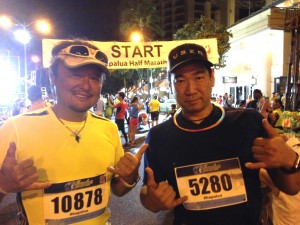 KCC student Nobu Ikeda shared his pre-race preparations. “Rub Vaseline on the bottom of your feet, eat carbohydrates and sleep well the night before,” he said. “Take a painkiller right before the race.” As Ikeda’s running partner Kazu Hanzawa affirmed, if you are already in pain, it’s too late to take a painkiller.

The weather was clear throughout and runners availed themselves of water stations and other stands offering bananas, donuts and ice packs along the course.

Ochiochi won the race with a time of 1 hour, 10 minutes and 37 seconds, thereby earning some $5,000 in prize money.
Ikeda crossed the finish line more than three hours later and headed straight to the emergency tent, which was staffed with volunteers from KCC, to ice his sore legs. 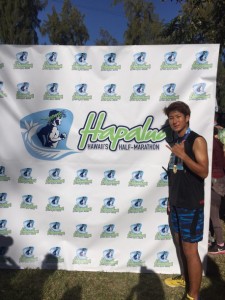 “It was a tough race for me but I felt Hawaiian warm ohana care at the end of the marathon,” he said. “The emergency people made me laugh.”