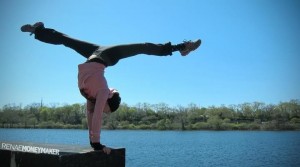 After growing up and competing for 19 years in gymnastics, and earning a scholarship to San Jose State, Renae Moneymaker not only has a unique name, but has become successful in stunt work at just 26 years old.

The list doesn’t end here. Moneymaker has also worked as a double for Olivia Wilde in “In Time,” “Total Recall” for Jessica Biel and Kate Beckinsale, and on “NCIS: Los Angles” for Daniela Ruah.

I was able to sit down with her and talk about how she got into stunt work, her time in gymnastics and the wonderful people in her life. After spending time with Moneymaker, it was easy to see that she is down to earth and loves what she does.

Even before her career in stunt work, Moneymaker has had the opportunity to travel quite a bit. Competing heavily in gymnastics, she traveled all over the U.S.; however, she later came to a point when she didn’t want to compete anymore, which led her to where she is now.

She talked to her sister, Heidi, who was with the 87 Eleven stunt team and doubled for Scarlett Johansson. She had just worked on the set of a gymnastics show when a pilot got picked up.

This show was “Make it or Break It.” Moneymaker had wanted to be an extra, but her sister told her she was good enough to double, and ended up connecting her with the gymnastics coordinator of this show.

“I went there and matched one of the lead girls really well and I ended up working on that,” Renae said.

Though still in college at the time, Moneymaker worked on this show for two seasons before moving to L.A., to continue to work until it’s third season, when it ended.

She then made the decision and commitment to move to LA.

“I moved out and made the decision and put everything I had into it, up and moved and committed to it,”  Moneymaker said.

Moneymaker was sure to mention that her sister and boyfriend have had an “enormous involvement” in where she is today and what she has accomplished.

“It’s definitely a long road. It’s [stunt work] not an easy thing to jump into…”

Renae has worked a lot with the 87 Eleven stunt team, a team that has coordinated stunts for movies: “Ninja Assassin,” “Troy,” “Hansel and Gretel: Witch Hunters,” “The Hunger Games,” “After Earth,” “Iron Man 2,” “Tron.”

“They just did ‘After Earth’ with Will Smith and Hayden Smith,” she said.

She’s been involved in stunt work for about two and a half years now.

But, if she were to count the time she was still in college working on “Make it or Break It,” her time spent in stunt work would be a little longer than three years.

Moneymaker shared that being involved with gymnastics all her life, served as good preparation for stunt work.

“[The work we do] depends on the job,” she said about what stunts are performed. “We fall down a lot, there’s wire work, explosions … recently I’ve been doing a lot of climbing.”

For her personally, gymnastics, falling down, doing flips and taking hits are only several of the things she does.

Aside from the days in the gym, cross training and stunts she does, again, her gymnastics background helped her deal with fear.

“I still get butterflies, I still get nervous [before doing a stunt],” she said. “If I let fear take over, I’ll be more likely to mess up.”

Developing the ability to shut off that fear is important. There has to be full commitment before going into anything, in both gymnastics and stunt work.

But doing stunt work has helped her to learn more about herself, mentally, and on occasion has to talk to herself or put her boyfriend Jeremy, her sister or her best friends’ voices in her head. She thinks of what they would tell her in a certain situation.

“You kind of have to have a conversation with yourself,” she said. “‘This is not just about you, there’s three other people here [in this scene].'”

Moneymaker has many important people in her life and is amazed by them all. She has her own advice for those of us still in school and searching for a career, either in the film business, stunt work like her, or really, any field.

“I would say, 100 percent, do your research,” she said. “Don’t just talk to one person who is successful, in any field you’re in.”

Talking to as many people as possible, getting the good, bad and the ugly about any job is key to figuring out if that is something of interest for a career.

In the stunt business, it usually takes a good five years to be known, she said.

“I’m so lucky to have this much success so early,” she said.

Even though it takes a while to build a stunt resume and to make a name for yourself, Moneymaker is humble and extremely thankful for her career.

“I’ve had such great mentors help me to learn and help me to get opportunities,” Moneymaker said. “I’m very, very lucky, and so thankful as to how it’s turned out.”