The recent death of an ‘ohi‘a lehua tree located in the Mala Maunu‘unu outside the Manele Building has Kapi‘olani Community College faculty and students concerned that a biological threat believed to be contained to Hawai‘i island may in fact have spread to O‘ahu.

“The tree died so quickly due to a fungal virus which had originally began on the island of Hawai‘i and found its way to our island,” said Chastity Akim, a peer mentor who helps to tend the mala.

The tree was chopped down to prevent further spread of the fungus. The remaining root system will need to be uprooted and removed before another tree can be planted in its place. 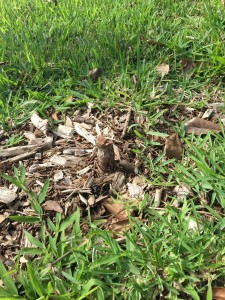 The ‘ohi‘a tree and its flower, the lehua blossom, is significant in Hawaiian culture. Legend has it that if one picks a lehua it will rain on the same day.

Ceratocystis fimbriata, known as Rapid ‘Ohi‘a Death, is vascular wilt fungus that kills 100 percent of plants that it infects.

The itself fungus has been present in Hawai‘i since at least the 1940s but had previously only threatened sweet potatoes. However, in 2010, scientists identified the fungus as the cause of ‘ohi‘a death in the Puna district of Hawai‘i island.

According to the O‘ahu Invasive Species Committee, infections begins with wilting and yellowing of leaves at the ends of branches and progresses until the whole crown of the tree browns and dies. The process can take mere days. The ‘ohi‘a dies so quickly there’s no time even for leaves to fall.

The fungus has spread across forest and residential areas of Puna and Hilo but was believed to be contained to Hawai‘i island.

If the fungus has in fact spread to other islands, the impact could be devastating. According to the University of Hawai‘i at Manoa College of Tropical Agriculture and Human Resources’ Hawai‘I Forestry Pests and Diseases division, the fungus has the potential to kill ‘ohi‘a trees statewide.

Local new agencies have reported on the impact of the problem on the upcoming Merrie Monarch Festival. Normally hula halau travel to Hawai‘i island early to pick the floral adornments their dancers will wear. However, this year kumu hula have called a kapu (ban) on picking ‘ohi‘a lehua, an action that KCC botany professor Michael Ross said could help raise awareness of the problem.

“Culture can get people more aware of what is going on with the ‘ohi‘a issues and maybe this can be a way of the communities (doing something) to help stop this madness,” Ross said.