In Fall 2016, Kapi‘olani Community College will play host to a rare edition of William Shakespeare’s First Folio, considered one of the rarest and most valuable publications in the world. 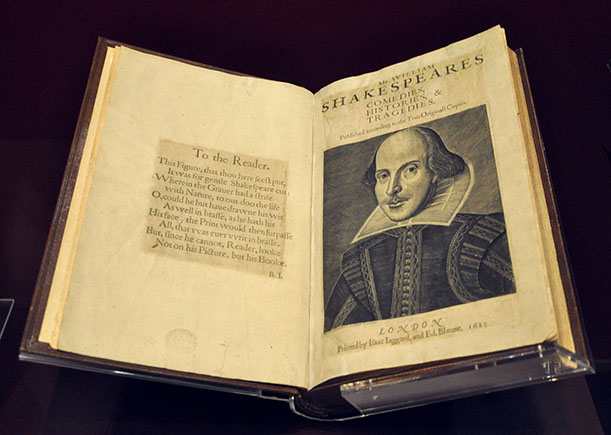 Shakespeare’s First Folio, one of the rarest and most valuable publications in the world.

“We just decided that we didn’t want this opportunity to slip away,” said KCC English professor Mark Lawhorn, who was able to coordinate efforts to bring the rare book to Hawai‘i. “It’s a really significant historical event because nobody has done anything like this before.”

Lawhorn, the president of the English Speaking Union-Hawai‘i Branch, applied to have the folio displayed at KCC and worked with the Hawai‘i State Library and the Hawaii Book and Music Festival to develop a series of public events. The requirements were intensive, including light and temperature readings for the proposed display site, but ultimately Lawhorn’s application was successful.

The folio will be on display for the public at Lama Library for one week. Additional security measures are being planned to ensure the book is safely kept.

The First Folio was compiled in 1623, six years after Shakespeare’s death, by the Bard’s friends John Heminges and Henry Condell. It contains 36 plays, many of which — including Hamlet, Romeo and Juliet, and Macbeth — that may have otherwise been lost. In Shakespeare’s time, actors used only sides, or cues, and the plays themselves were rarely preserved in their entirety.

“These guys did a great cultural service preserving the plays,” Lawhorn said.

There are only 233 known copies of the folio still in existence. In 2006, a copy put up for auction at Southeby’s yielded a $5.2 million winning bid.

The arrival of the First Folio next year represents a valuable opportunity for students to learn and reflect on the impact of Shakespeare’s great works. Lawhorn is already working with KCC faculty to develop lesson plans around the exhibit.