Growing up in rural Montgomery, Alabama, Dr. Leon Richards knew the world as a significantly different place than it is today.

“During this time, Alabama and the southern states, were segregated,” Richards said.  “The races were separated (and) at this time there were only two races: you were either white, or colored.  There was no in-between.”

The Kapiolani Community College Chancellor spoke before 168 KCC students and faculty at a Consolidated Theatres’ Kahala 8 theater for a private screening of Ava DuVernay’s Oscar-nominated historical drama “Selma.”  The film chronicles Dr. Martin Luther King’s campaign to secure equal voting rights via nonviolent demonstrations and a series of marches from Selma to Montgomery.  The event, hosted by the KCC English for Speakers of Other Languages (ESOL) program, featured a short speech by Dr. Richards, who participated in the marches at Selma along with Dr. King and other leaders of the Civil Rights movement. 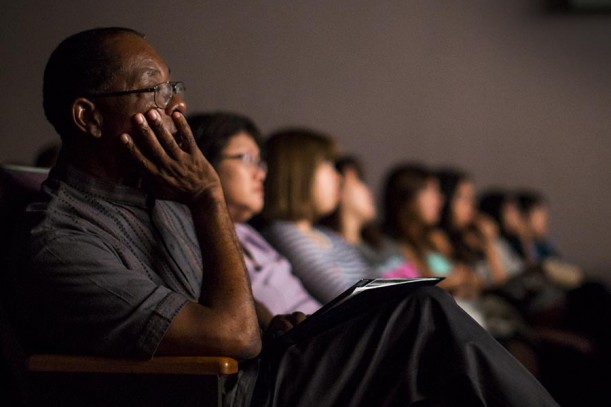 “And so at that time, society mirrored those two colors: white, colored.” Richards said after a long pause.

An almost anxious silence fell over the audience.  As melancholy began to set in, Dr. Richards continued to talk, explaining that the separation of black and white meant that there were essentially two of everything in society. Two water fountains, two entrances to restaurants, two school systems. 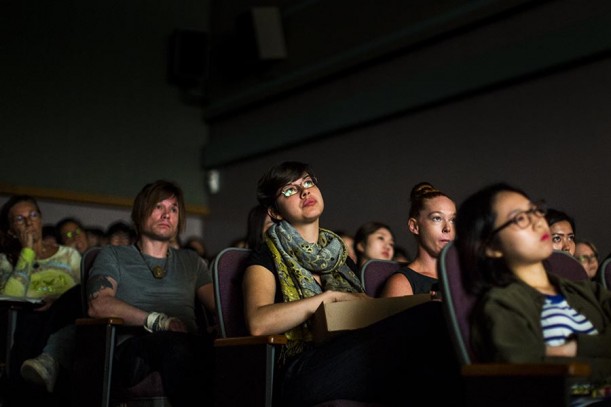 KCC students at the “Selma” showing

Dr. Richards described his family tree being more akin to a forest, having enough siblings to the rosters of “Two baseball teams, two football teams – and substitutes.”  He described growing up in rural Montgomery during segregation, a time of extreme prejudice and hatred.

He shared a story about his brother returning from active military service and purchasing a brand new car. The brother offered to take the young Dr. Richards and some of of his siblings, Eddie, Ellis, and Pop John, for a ride in the brand new vehicle.  They hit the open road and drove around, but it wasn’t long until they were stopped by a white police officer.

“(Did the officer say) ‘Oh, nice day isn’t it? Oh, nice car!’ No, none of that, his first words were ‘Boy, where did you steal that car from?’” Richards said in a firm voice.

The older brother asserted to the police officer that he purchased the vehicle with his own money, to which the officer replied that Dr. Richards’s brother was to only reply with only “yes sir” or “no sir” and to show the officer respect.

“My brother said ‘Why should I?’” Richards said.

The police officer replied that they would “pay for this.  I will get you. You will pay for this you – (You) answer me yes sir or no sir.”

A few weeks’ later shots rang through the window of their house and a 10-foot cross was set ablaze on their front lawn.  The Ku Klux Klan had left a message of hate and terror for the Richards family.  Dr.’s Richard’s brother left Alabama to live in New York with other family members.  Dr. Richards made his voice heard by participating in the Selma marches.

Dr. Richards never told his mother he participated in the marches.

ESOL faculty planned the screening as a nod to Black History Month and the 50th anniversary of the Selma-to-Montgomery marches and as an opportunity to help students understand of the impact the actions depicted in the film impacted American society.

“The relevance of civil rights and in particular of the Civil Rights Movement of the 1950s and 1960s is relevant to our community and to our students.” ESOL Professor Guy Kellog said.

For student Everett Wayne Glenn, the civil rights movement is more than just a chapter in the history books.  Born and raised in Cleveland, Ohio, in 1963, Glenn is a self-described “civil rights baby” who after a stint in the United Sates Air Force now calls Hawaii home.  After hearing Dr. Richards speak and watching the movie, he said he was filled with a lot of raw emotions.

“I don’t like the N-word,” Glenn said after the screening.  “There shouldn’t be any reason to use that word.  Not even if you’re black or a rapper.  It doesn’t empower anyone.”

Sol Yi “Amy” Kim, a student in the Second Language Teaching (SLT) program, attended the screening as part of her Korean 240 class.  While the movie was an eye opener for her, the true reality check came when Dr. Richards spoke about his experiences with segregation and in Alabama. Kim said it gave realism to what they read about the civil rights movement.

“History should not be forgotten,” Kim said. “We all have rights because of what they did.”