Bradley Hughes and some of his fellow Mala Maʻunuʻunu caretakers recently received T-shirts designed by a University of Hawaiʻi student and emblazoned with “Turn Your Hands Towards the Earth,” the motto of the Kapiʻolani Community College’s own sustainable garden.

The gesture was a meaningful one for Hughes, who is accustomed to working long hours for little more than love. As Hughes notes, the mala receives “very little money, if any funding at all.

“Most, if not all, of the work is done by (Service and Sustainability Learning) students or volunteers,” said Hughes, a Hawaiian studies major at the UH Manoa. “Without them, we would need about four people, and we’d need them here every day.”

Mala Maʻunuʻunu, named after a particular wind that blows in the Kaimuki area, was established behind the Manele building by Nawaa Napoleon, Linguistics and Literature department chair, and Lehua Gaison Tyler, a staffer in the chancellor’s office in 2008. In the years since, the mala, an approved Malama I Na Ahupuaʻa (MINA) site, has developed into a place for organic landscaping, farming and promotion and Hawaiian culture and crafts. 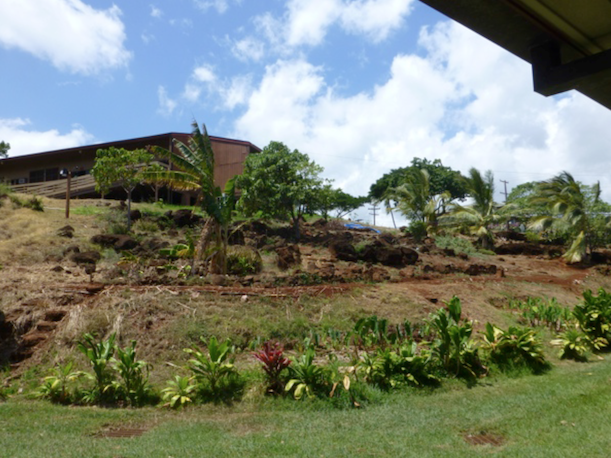 As a peer mentor, Hughes teaches students and volunteers what he calls basic Hawaiian concepts of life: respect, family, working together with patience, understanding, tolerance, good intention, self-worth and empowerment.

“Everybody’s point of view is important,” he said. “You never understand it until you are a part of it.”

Hughes weaves Hawaiian knowledge, history, culture, teachings and philosophy into every gathering of helpers. Hughes stands beside his students and volunteers as they plant, weed, water, dig, build, move earth and fashion crafts out of organic materials, imparting knowledge to his apprentices.

“How do you make something beautiful,” he asks. “True answer comes from the ʻaina telling you what to do.”

Under Hughes’ tutelage, students learn ancient crafts, like making bamboo stamps or leaf bracelets, or tea from plants grown in the mala.

“We will be producing enough kalo to teach people how to do it themselves,” he said. “(In) Hawaiian culture, you sustain the community, not just yourself.”

For information on how to get involved with the mala, contact Kat Coelho, NHSS Support Specialist, at kapnhss@hawaii.edu or 734-9714.