A mantra often recited by her high school tennis coach has helped Michelle Back focus on her journey through life.

“There are three important things in your young life,” Back said, recalling her tennis coach Kyle Hiranaga famous saying, “Your schooling – later your career – your hobby and your social life. You can only do two exceptionally well or be mediocre at all three.”

The advice helped Back do well in high school, and helped her as she played on her high school tennis team.

It’s that same focus and determination that Back cites as the reasons that she’s doing well balancing two part-time jobs and a staggering course load of seven classes at Kapiolani Community College. 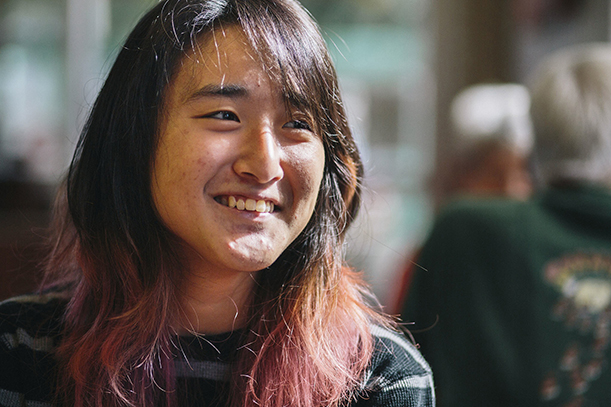 HONOLULU, HAWAII – APRIL 03: Michelle Back sits at a table at McDonalds along Keeaumoku Avenue on April 03, 2015 in Honolulu, Hawaii.

The 18-year-old freshman recently graduated from President William McKinley High School and has her sights set on entering KCC’s Radiologic Technology Program after she finishes the required general education requirements. Back has had her sights set on entering the healthcare field since a career fair at Washington middle school, but it wasn’t always as a radiology technician.

“I actually wanted to be a registered nurse as first,” Back said while eating breakfast at McDonalds. “But the problem is that I have an extreme fear of blood – which is really bad if you’re a nurse.”

Between her two part-time jobs, Back works anywhere from 20 hours to almost 40 hours a week, in addition to writing papers about the ethical ramifications of giving a Jehovah’s Witness a blood transfusion for her Philosophy 250, “Ethics in Healthcare” class or studying for math, anatomy, or any of her other four classes. Splitting time between working at Kulu Kulu café and TJ Maxx and being a full-time student, Back said she barely has anytime for “any kind of social life.”

Back works to pay for school and support herself. She’s on her own when it comes to tuition, money for books and any other kind of spending money. She doesn’t qualify for Federal Student Aid, which includes nine federal student-aid programs, 605 state aid programs and most of the institutional aid programs, due to her household income being higher than required. But when she starts to stress about her workload and school she reminds herself about why she’s doing what she’s doing.

“I tell myself that I’m doing this for my future, and I’m doing it to achieve my goals,” Back said. “Focusing on that makes it a lot easier to take on a full load of classes and as well as two jobs.”
In her rare free time, Back enjoys helping out with her alma mater’s tennis team where she helps current members with drills and practice. She also enjoys reading books of the adventure/science fiction variety. She just finished up Ruins by American author Orson Scott Card, who is best known for his novel, and subsequent movie adaptation, “Ender’s Game.”

Despite being constantly busy with school and work, Back has her eyes set on her goal of graduating and starting her career.

“Sometimes, you have to make sacrifices to get where you want to go in life,” Back said.