More than 60 Kapiolani Community College students and faculty participated in a walkout on April 13 to protest the planned construction of the Thirty Meter Telescope on the summit of Mauna Kea on Hawaii Island. 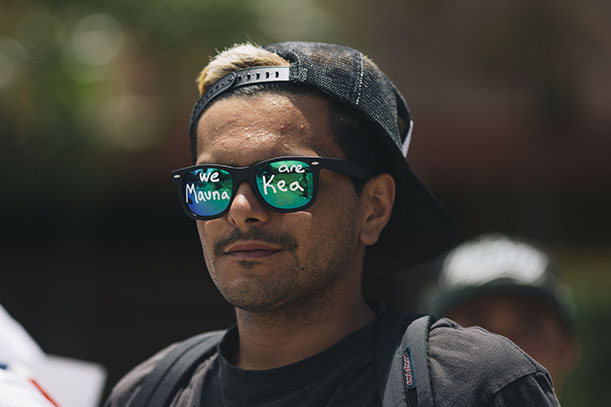 HONOLULU, HAWAII – APRIL 13: Hiapo Armstrong-Kanekoa is seen during a protest of the Thirty Meter Telescope in front of the Great Lawn at Kapiolani Community College on April 13, 2015 in Honolulu, Hawaii.

The walkout, which was held in conjunction with a similar walkouts at each University of Hawaii system campus, emptied onto the KCC Great Lawn for a rally and featured music performances and speakers who voiced their opposition to the building of the $1.4 billion TMT project.

HONOLULU, HAWAII – APRIL 13: A protestor sits on the Great Lawn with a Hawaiian Flag during a protest of the Thirty Meter Telescope in front of the Great Lawn at Kapiolani Community College on April 13, 2015 in Honolulu, Hawaii.

“The students you see up here (rallying) are going to end up inheriting our responsibilities of taking care of the ‘aina,” said Nāwa‘a Napoleon, chairperson for Language, Literature, and Linguistics department. “So we’re here supporting them because they’re really our future.”

But the $1.4-billion project is now in jeopardy in the aftermath of protests on social media and across the state. On April 7, Governor David Ige announced that construction of the TMT project would be temporarily put on hold for a week, referring to it as a “timeout.” A second weeklong “timeout” was announced on April 11. 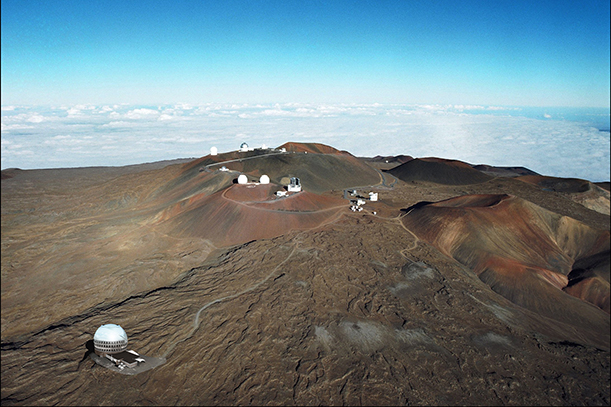 An outpouring of support on social media and from celebrities and lay people alike has surged in the wake of the arrests of 31 protestors in early April. Social media users have been using the hashtags #AoleTMT and #WeAreMaunaKea to voice their opposition and show solidarity with protestors on Hawaii Island.

Students walking along the Great Lawn between classes stopped to watch and listen to the protesters. Others kept going about their business. A  few students, unaware of the gathering, walked through the crowd which at one point had enveloped most of the Great Lawn and ‘Ōhia sidewalk. But not all of the students listening to the protest object to TMT.

“As long as the construction process isn’t doing any damage to the environment I’m all for it,” said KCC student Chao Zhang, who is studying physics. “Because the advances in science and astronomy are going to benefit the entire human race.

“I understand that the local people have their religious and spiritual concerns, but I believe we can find a consensus.” Zhang added.

But according to biology major and STEM student Maria Petelo, the wēkiu bug, a flightless species of seed bug that is endemic to the summit of Mauna Kea, is in danger of extinction due to the construction of TMT. She says that the loss of the wēkiu bug would drastically upset the natural balance of the summit’s ecosystem. Lake Waiau, located inside the Pu‘u Waiau cinder cone atop Mauna Kea, is also in danger of being affected by TMT construction, according to Petelo. If Lake Waiau, which is argued to be the highest lake in the United States, dries up, Petelo says that it could drastically affect Hawaii Island’s watershed after water is forced to be rerouted.

“We don’t want to be like California,” said Petelo. “No offense, but we like our water. So, aole TMT.” 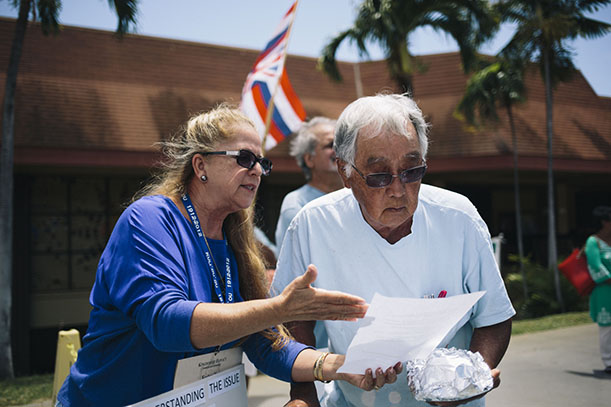 HONOLULU, HAWAII – APRIL 13: KCC STEM Center Coordinator Keolani Noa goes over a fact sheet listing facts about TMT and Mauna Kea during a protest of the Thirty Meter Telescope in front of the Great Lawn at Kapiolani Community College on April 13, 2015 in Honolulu, Hawaii.

In a statement released on Friday April 17, Gov. David Ige said that TMT leadership notified his office of the continued postponement of construction.

In that same statement, Ige said: “My understanding is that TMT followed an almost seven year planning and permitting process, which included public hearings and community input. Following this process, project permits were issued. The TMT team is legally entitled to use its discretion to proceed with construction.”

The governor’s statement also says that any further announcement regard TMT’s construction schedule will be announced by TMT at a later date.

While some explained reasons as to why the telescope construction is bad for Hawaii and Mauna Kea, Brianne Kondo, of Hilo thanked everyone in attendance for their support and encouraged them to continue to oppose TMT.

“They hear us,” said Kondo, as she paused and wiped away tears. “The gods hear us; the mountain hears us. We need to just stand together and keep doing what we’re doing and pass the word on.”

As students continued to gather, faculty member Kauka de Silva, who described himself as the “old billy goat” of KCC, stepped up to the microphone to speak. De Silva quoted Bob Dylan and spoke about his entanglements with law enforcement while protesting. He was arrested in 1971 for protesting pig farmers in Kalama Valley across from Sandy Beach, and again in 1973 after the evection of people from their homes at Sand Island. He also spoke about watching the recent University of Hawaii Men’s Volleyball team Senior Night, where the University President David Lassner, was there to congratulate the seven graduating seniors. 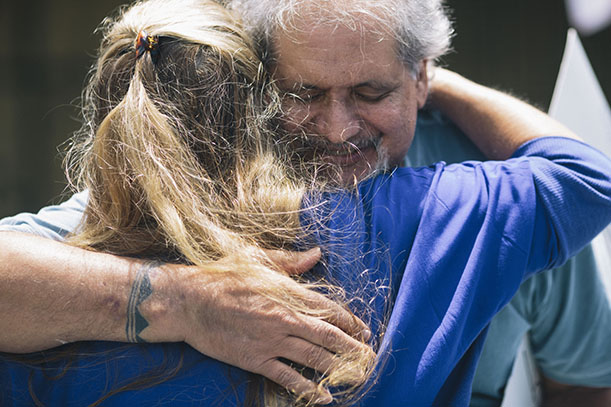 HONOLULU, HAWAII – APRIL 13: Kauka de Silver hugs Keolani Noa during a protest of the Thirty Meter Telescope in front of the Great Lawn at Kapiolani Community College on April 13, 2015 in Honolulu, Hawaii.

“They all get lei and they all talk about how they love Hawaii so much,” said de Silva. “But to me – to be very frank – they’re grazing off of our culture. Like cows in a pasture. Has Lassner come down and talk to us? No. Did he go and see the volleyball game? Yes.”

De Silva argued that all the ‘aina, or land, is sacred to Hawaiians not just Mauna Kea. He feels that there is no need for a large telescope to sit atop Mauna Kea’s summit.