Three Kapiolani Community College students who are collaborating with other students from across the University of Hawaii system on the RockSat program will have a chance to see their hard work among the stars this August. 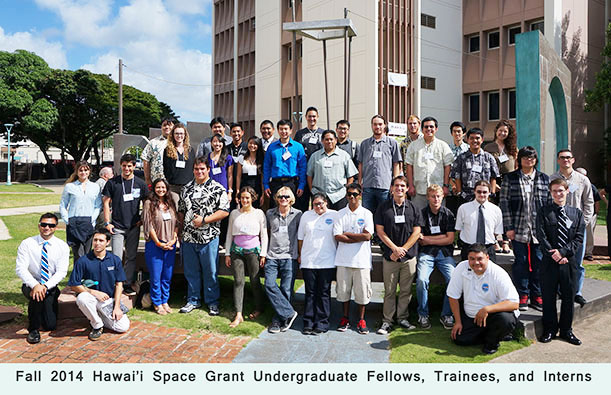 “We’re building a payload that will be used to collect UV spectrometer data (from) above the atmosphere,” explained team member Jackson Poscablo.

Students from Kauai Community College, Honolulu Community College, Windward Community College and KCC working since September of 2014, as part of a larger two-year program funded through a $500,000 grant from the National Aeronautics and Space Administration. The purpose of the RockSat project, explained teammate Mitch Mikami, is to bring the four campuses together so the students can learn how to collaborate with other engineers who might not be in the same physical location to design a payload device, implement it, and use it to collect the data.

“Whenever NASA does something they go through a bunch steps,” said project adviser Herve Collins, “and they want the students to go through those same processes.”

The KCC team, comprised of students Poscablo, Mikami and Kalai Garcia, is primarily responsible for designing the printed circuit board, or PCB, which mechanically supports and electrically connects electronic components using conductive tracks. The PCB is crucial to the success of the collectors’ operation because it is what allows the different instruments to talk to each other and record the data that is collected.

“There is so much G-force in the takeoff of the rocket that if you use wires they get smashed,” explained Collins, gesturing thumbs down while making a raspberry noise. “And (if that happens) you lose the connection (between components).”

Unlike similar science project called CanSat (Canister Satellite) RockSat is not competitive in the sense that the best-designed payload device will be launched into space.

Each participating school designs a their own payload that has its own specific goals in mind and they are launched together. The device, once completed, will be sent up in a rocket from a site in Colorado into the space above Earth’s atmosphere in August to collect ultraviolet spectrometer data.

“The thing about the data is we don’t know much about it,” Poscablo said. “That’s why we’re collecting data to have a better understanding of it.”

The reason the device has to go above the atmosphere is due to the atmospheric absorption, explained, Mikami. Certain wavelengths of light — in fact, most of them — never reach the Earth’s surface; they are absorbed, which is why the payload device needs to be above it in order to collect data.

“(This) gives us an idea on star composition since the data comes from radiation from the star,” added Collins.

The various campus teams finished individual subsystem testing last month and are moving ahead into the Integrated Subsystem Testing Review (ISTR) during which all the subsystems are put together and tested to see if they work with each other. They met during spring break and proceeded to test the subsystems.

“There were design issues with the PCB that came up during testing,” Mikami said. “Things didn’t work. Now we have to refine our design.”

According to Mikami, what might be an issue is that the size of the traces, or the conductive tracks, might not allow enough power or information to travel from the board to the components and vice versa. The KCC team is working closely with the team from Honolulu CC team to make the necessary adjustments to the PCB.

“We realized right angles on conductive tracks are bad,” Mikami said. “Apparently with a high enough voltage, electricity can arc out of it!”