Hosting one of the most significant collections in literary history is a tremendous honor — but it’s not for the weak of will or faint of heart, as Kapi‘olani Community College English professor Mark Lawhorn can attest.

This year, the 400th anniversary of the death of legendary English playwright William Shakespeare, the Folger Shakespeare Library has released copies of the extremely rare First Folio to sites across the United States.

The First Folio represents the work of actors John Heminge and Henry Condell to preserve 36 Shakespeare plays, half of which had not previously been printed, immediately after Shakespeare’s death in 1616. The folio, which was published in 1623,  includes many of Shakespeare’s most well-known plays, including Julius Caesar, Macbeth and The Tempest.

Folger holds 82 copies of the First Folio, over one-third of 233 surviving copies.

Thanks largely to Lawhorn’s efforts, KCC is the only community college selected to host a copy of the treasured collection. The First Folio is on display at Lama Library through May 25.

“The application process scared many people away — a lot of programming requirements, a lot of technical requirements,” Lawhorn said. “We basically had to turn the exhibit space on the second floor of Lama Library into a museum-quality space.”

Lawhorn, a member of the English-Speaking Union Hawaii chapter, said he first heard about the First Folio tour while on a trip to Maine. He immediately sent word back to friends in Hawai‘i.

When no organization in Hawai‘i applied, it seemed as if the state would miss out on a rare and valuable opportunity. Lawhorn refused to let that happen. 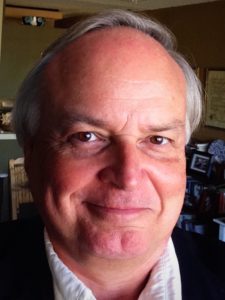 “You know the saying, ‘Fools rush in?’” Lawhorn told donors and supporters at the April 21 opening reception for the Lama Library exhibit. “We were the fools.”

To prepare the library for the folio’s arrival, Lawhorn and his project team needed to prep the facility to adhere to rigid standards for lighting, temperature, humidity and security.

“If you are dealing with a rare paper artifact, UV light is one of the worst things it can be exposed to because it causes the paper to deteriorate,” Lawhorn explain. “When people go into the room that the display case is in, that room will be very dim.”

However, merely dimming the lights was not enough to satisfy the requirements of housing a historical document. Although the library windows are already treated with a UV protectant and are equipped with blinds, the head of conservation at the Folger Shakespeare Library required that the windows be covered with another blocking film to further reduce light coming through the cracks in the blinds.

Further, to keep temperature constant, the air-conditioning system in the library has to run non-stop through the length of the exhibition. Two dehumidifiers have also been utilized to keep humidity to a safe level for the document.

Lawhorn said the preparations were worthwhile to give students and community members an opportunity to view the historic document.

“Shakespeare was born in a plague year in Stratford-on-Avon,” he said. “He was b orn in 1654 and about of the population died, so there were points along the way where we almost didn’t have Shakespeare.

“If it weren’t for the First Folio we wouldn’t have 18 of the plays,” he continued. “If a little handful of us hadn’t applied to host this, is wouldn’t have come to Hawai‘i. There are a lot of ‘what ifs’ out there, so it is kind of miraculous in a way that this book is here in our library and you can go see it.”